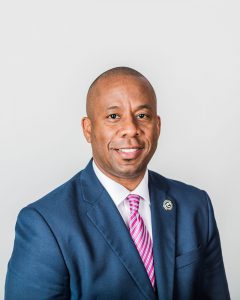 CMCSS Director of Schools Millard House II has been named the lone finalist for the superintendent of Houston Independent School District (ISD) in Houston, TX.

“I will miss the students, employees, and community members with whom I have built strong relationships over the past four years,” stated House. “I have learned a lot from the talented educators and leaders in the Clarksville-Montgomery County School System. I will utilize my professional experiences from Tennessee, North Carolina, and Oklahoma and my continued focus on equity and innovation to lead Houston ISD.”

With around 30,000 employees serving more than 200,000 students in 276 schools, Houston ISD is over five times larger than CMCSS and is the largest school district in Texas and seventh largest in the nation.

“I will be working with the CMCSS School Board and my Senior Leadership Team to make recommendations for the smoothest and most orderly transition possible over the coming weeks,” stated House. “The 2020-21 school year was likely one of the most difficult school years we’ve ever faced in public education, and I want to ensure as I exit that CMCSS is set up to have a great 2021-22 school year.”

House has been CMCSS’ Director of Schools since 2017. Under his leadership, the district has continued to advance as a high-performing school system, receiving state and national recognition for its accomplishments and innovation, including CMCSS K-12 Virtual School, the Early Technical College at TCAT, Barksdale Elementary Spanish Immersion Program, 1:1 technology for students in K-12, and Teacher Residency Pathways, to name a few. During his tenure with CMCSS, 26 schools were named TN Reward Schools for performing in the top 5% in the state and all eight high schools ranked in the top 25% in the U.S. News and World Report.

Recently, House was named the TN Mid-Cumberland Superintendent of the Year. While leading CMCSS, he was selected for Chiefs for Change, one of the most prestigious honors for a superintendent with a membership including the current TN Commissioner of Education and superintendents from Chicago, Philadelphia, and Baltimore. He was selected by the Commissioner of Education and his colleagues to be the Director-at-Large for the Tennessee Organization of School Superintendents (TOSS). Additionally, House has been invited to meet with the Bill & Melinda Gates Foundation, Scarlett Family Foundation, and other major national philanthropists because of his reputation for strong leadership and focus on innovation and equity.

House is a Tulsa, OK native with almost three decades of education and nonprofit experience. Before being selected as the CMCSS Director of Schools, he served as an Executive Consultant and Executive Director of New Leaders Charlotte in Charlotte, NC. He also served as the Chief Operating Officer of the Charlotte-Mecklenburg School System in Charlotte, NC and Deputy Superintendent of Tulsa Public Schools.

Prior to being named as a member of the executive cabinet in Tulsa, he founded and led a college preparatory middle school in one of Tulsa’s most economically underserved communities. Over the course of four short years, his school became one of the highest performing and most sought-after schools in Tulsa. Before founding his school, House was one of the nation’s youngest public-school administrators as he served as assistant principal for one year and principal for four years at Marian Anderson Elementary School in Tulsa at the ripe age of 26. During House’s tenure, Anderson Elementary went from being designated one of the lowest-performing schools in Oklahoma to being one of the highest performing Title I schools in the state. In 2003, House was voted Tulsa Public Schools’ Principal of the Year. He was the first African American to earn this honor. He also was named the Outstanding Administrator of the year by the Tulsa Area Alliance of Black School Educators.