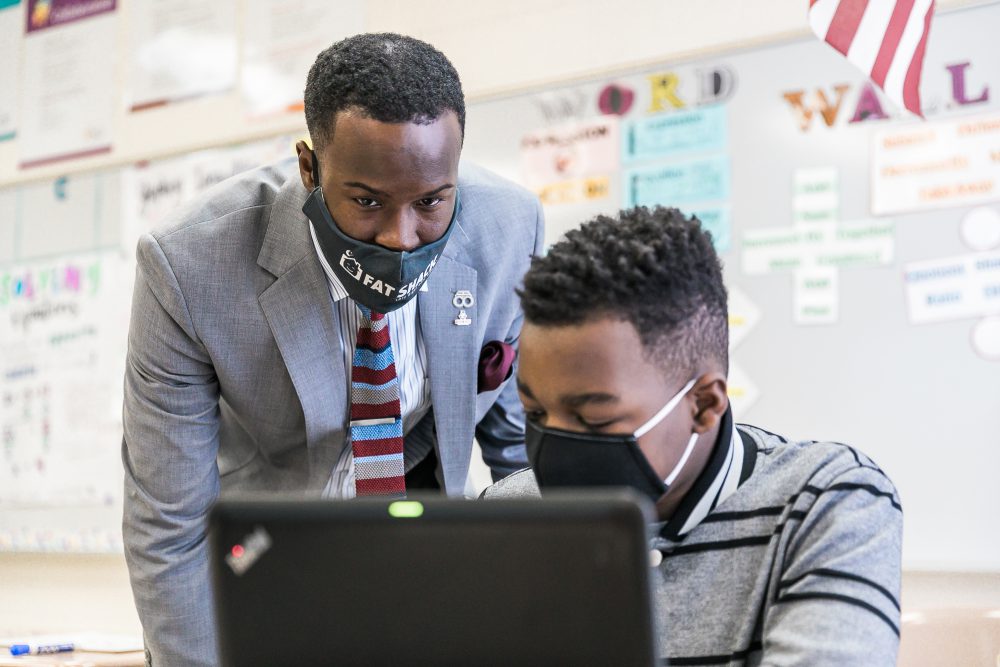 Nothing motivates educators more than knowing their students are succeeding. For Zavion Williams, he credits much of his extraordinary successes to the dedication of his former teachers. Now, he’s back in the classroom with the desire to inspire the next generation.

Williams, a West Creek High alum, uses his natural leadership abilities to encourage the students at West Creek Middle to reach their potential.

From the beginning, Williams appreciated the opportunities school provided. At Hazelwood Elementary, he remembers the assemblies and community exposure. There was always something engaging for the students.

“My favorite teacher was Carol Berry,” said Williams. In second grade, Mrs. Berry pushed her students to learn at a fourth-grade level, from complex concepts to their vocabulary. At one point, Williams’s mother even began to question the teacher’s methods. “Mrs. Berry just told her, ‘I want my students to reach for the stars.’ She just pushed us, and by the next year, I already felt advanced. From then on, I always made myself learn more and try to be ahead.”

Push himself is exactly what Williams did. “I’m blessed to have teachers who were very involved. They cared about me as a student and an athlete.” As a member of the basketball team, Williams was naturally in leadership positions. Through his athletic journey, he was able to experience more, including a championship run.

Between his sophomore and junior year, West Creek high opened, and Williams was part of the first group of students transferring to the new school. At first, he was apprehensive about having to switch schools. But eventually, he embraced West Creek High as another opportunity for growth.

After graduation, Williams attended Lipscomb University and Austin Peay State University, earning a degree in sports broadcasting. It was then that Williams connected with the basketball coaches at Northeast High, who encouraged him to consider assistant coaching. While there, Mandy Frost, now Assistant Principal at West Creek High, recognized there was something more to Williams. She noticed the connection he made with his athletes and his natural ability to develop relationships.

At the time, “education was nothing I thought I would be a part of, but [Frost] gave me the confidence and the opportunity,” said Williams. Mrs. Frost told him she saw how the students looked up to him and responded to his teaching. She encouraged him to consider a substitute teacher role.

While serving as a substitute and seeing the impact he made, Williams then decided to take the next step and become a teacher resident.

He feels the decision brought him full circle. “I’m a community advocate. I wanted to come back to the education field and help close the opportunity gap.” As a younger teacher, he feels his current experience is a tangible reminder to students that anything is possible.

“It’s easier for kids to associate themselves with someone who looks like them, acts like them, and is from their community to encourage them to do more,” said Williams. “There are a lot of voids in middle school that need to be filled.” As an African-American male, he feels he has the chance to build a strong foundation for many middle school students.

If serving as a teacher resident and a coach were not example enough, Williams continues to be the embodiment of a strong work ethic through his entrepreneurial spirit. Last year, Williams and a long-time friend took a chance and filled out a grant application to open Fat Shack.

“I see the value of this city,” said Williams. Growing up as a military child, he saw the opportunity of the area. “[Fat Shack] is the first of its kind in the South.” The food is ‘late night done right’ with sandwiches, burgers, shakes, and more. Today, he continues to network with other business owners and community leaders. “You never know in the future how [the relationships you build now] will impact your future.” He knows meeting people and working with others is how his business will continue to grow.

The skills and experience Zavion Williams learned while in school have propelled him in life. Now, he is successfully showing the next generation how to do the same.